About Us
About Us
Home > About Us > Overview 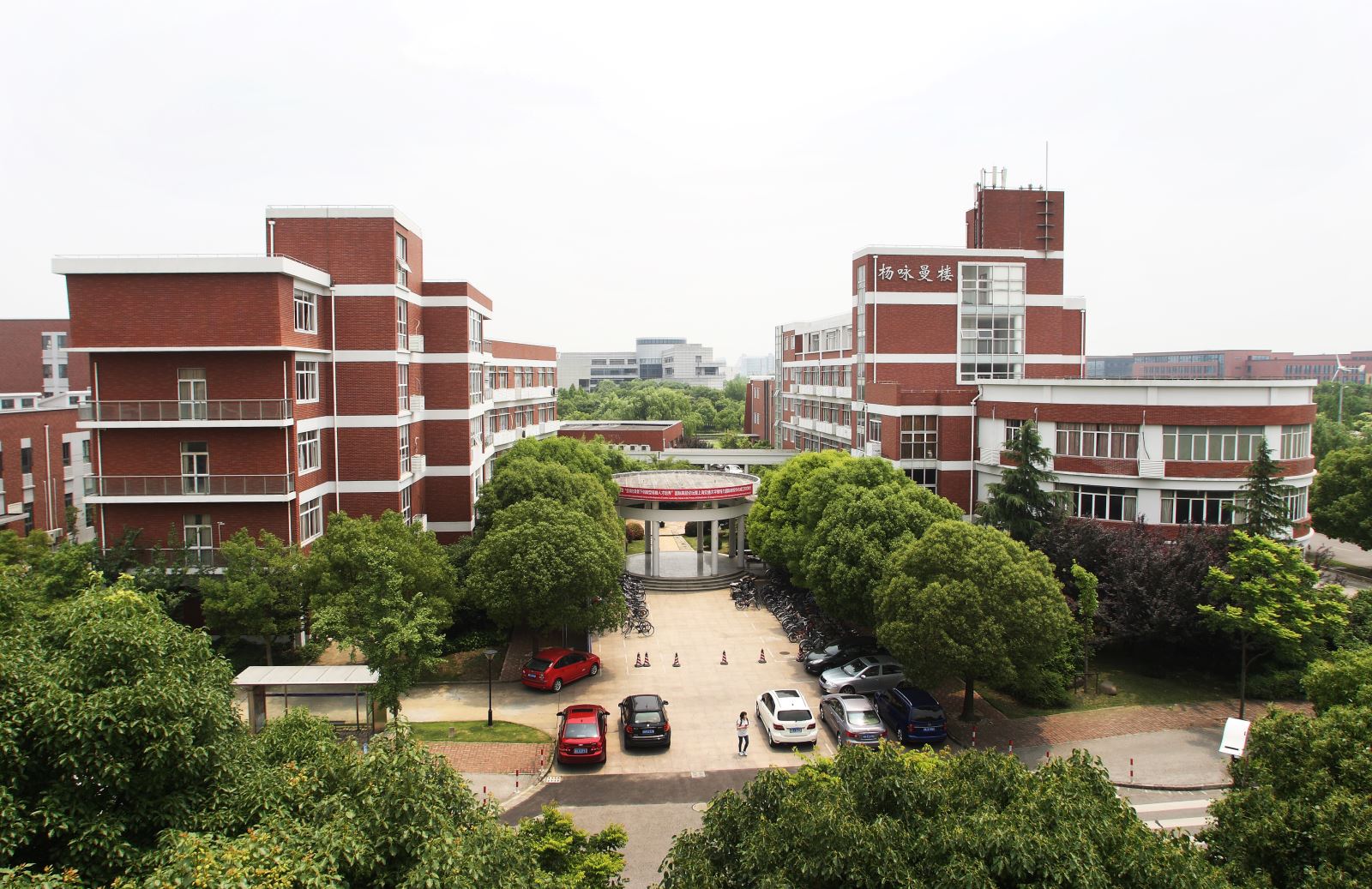 In recent years, with the implementation of major strategies of “talent development, globalization, interdisciplinary research, strong links to industry, responsiveness to the priorities of government”, subjects of SFL have experienced a rapid growth.

In the 4th round of national subject assessment in 2017,

the subject of Foreign Languages and Literatures in SJTU was

To build first level subjects, SFL has been introducing and training talents. At present, the faculty includes 26 professors and 22 doctoral supervisors, and 55% of the faculty members hold Ph.D. degrees. SFL boasts members of the Royal Society of Canada, the Academy of Europe, and the National Humanities Center in the United States, as well as members on the list of Nation’s Master Teacher, “Young Top-notch Talent” in the national “Ten Thousand Talent Program”, “Young Scholars in Changjiang (Yangtze River) Scholar Program”, “New Century Support Plan for Outstanding Talent” of the Ministry of Education, and “Shanghai Thousand Talents Program”.   World-renowned experts are teaching in SFL as chair professors. In addition, a number of professors have been serving in national academic organizations or institutions as members of Subject Evaluation Group of the State Council, members of China National Committee for Translation and Interpreting Education, vice-chairman of the National Foreign Languages Teaching Advisory Board, and members of the National Advisory Committee on Teaching English Language to Majors in Higher Education under the Ministry of Education.

With the improvement of research capacity, SFL has witnessed a substantial rise in the number and quality of research achievements. In recent years, our teachers and researchers have published more than 500 papers in CSSCI core journals and over 170 articles in A&HCI and SSCI journals. We have won 3 University Research Achievement Awards of Ministry of Education, 5 Shanghai Philosophy and Social Science Achievement Awards, 2 National Higher Education Teaching Excellence Awards and 3 Shanghai Higher Education Teaching Excellence Awards. We have undertaken a total of over 90 science projects above the provincial level, including 5 major projects of the National Social Science Fund of China and 1 key project of the National Social Science Fund of China.

SFL is actively engaged in academic exchanges. In recent years, SFL has held over 130 academic lectures and 78 academic conferences, including 56 domestic conferences and 22 international conferences. SFL professors have chief-edited 4 international journals (Frontiers of Narrative Studies, Journal of Second Language Studies (JSLS), Asian Association for Language Assessment (AALA) and TESOL International Journal) and 1 Chinese journal (Contemporary Foreign Language Studies). The Springer Corpora and Intercultural Studies book series and the Routledge Applied Linguistics book series are published under the auspices of SFL, SJTU. Intercultural Studies and other English series. These have contributed significantly to academic exchanges and cooperation in China and abroad. 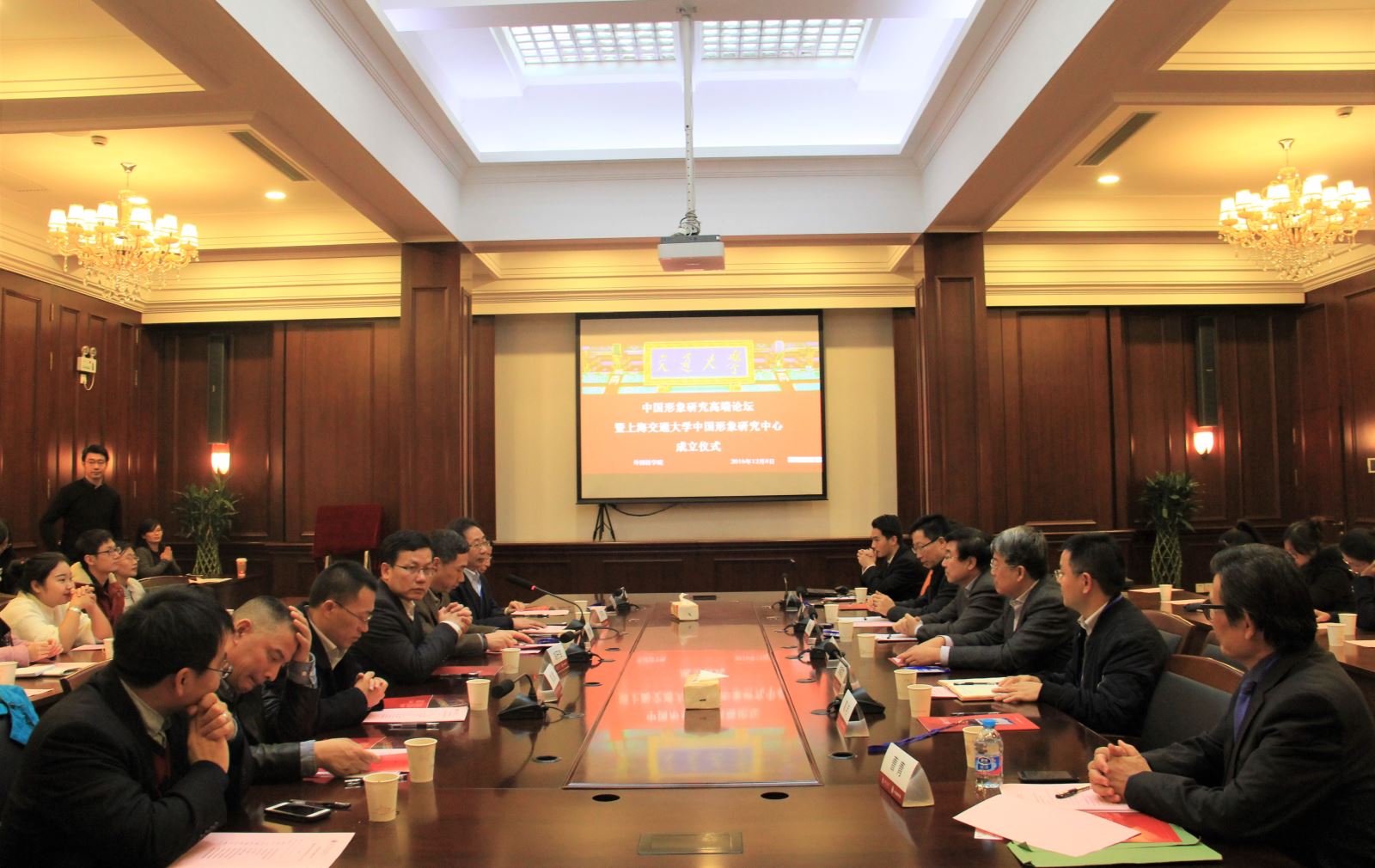 Guided by the principle of “Global Awareness, Diversified Skillset, High Caliber”, SFL aims to cultivate interdisciplinary talents of new linguistic subjects (including linguistic intelligence and speech pathology) with both science and humanity knowledge, as well as talents with business finance knowledge and Chinese-English translation skills. SFL actively reform and innovate its program schedules and has opened translation and linguistics subjects to better prepare students for postgraduate education. The “1+2+3” postgraduate education schedule in SFL is the first in the country. Senior translators from the Ministry of Foreign Affairs, China International Publishing Group, and the United Nations are invited to give lectures to students with the aim of cultivating top translators and talents that well meet the demands of international organizations.

SFL has established cooperation relationships with many world-renowned universities in more than 10 countries including UK, US, Germany, and Japan, and has implemented exchange programs and double degree programs for undergraduates and postgraduates. Programs set up in recent years include the master’s joint program with Warwick University, and the SJTU-University of Melbourne exchange program for masters in applied linguistics.

SFL currently has more than 70 doctoral students, over 160 postgraduate students, 341 undergraduate students and 63 international students. With excellent performance and professional competence, SFL students have competed aggressively in many foreign language competitions and won medals in big competitions including the “FLTRP Cup” English Public Speaking Contest, the “21st Century Cup” National English Speaking Competition, the National College Japanese Knowledge Contest and the National Debate Competition for German Students (Nationaler Debattierwettbewerb für Germanistikstudierende). The school attaches great importance to the fostering of students’ creativity and entrepreneurial abilities, and encourages students to leverage their classroom learning into practice. Many SFL students have participated in the innovation and entrepreneurship competitions, and won awards such as the gold award of the “1st Yuan Chuang Cup” technical innovation competition, the first prize of the “Tsien Hsue-Shen Cup” science and technology innovation competition, and the gold award of the “Google Cup” business plan competition. SFL graduates compete with confidence in the job market, and more than half of the graduates are admitted to world-renowned universities for further study like Cambridge University and Stanford University. 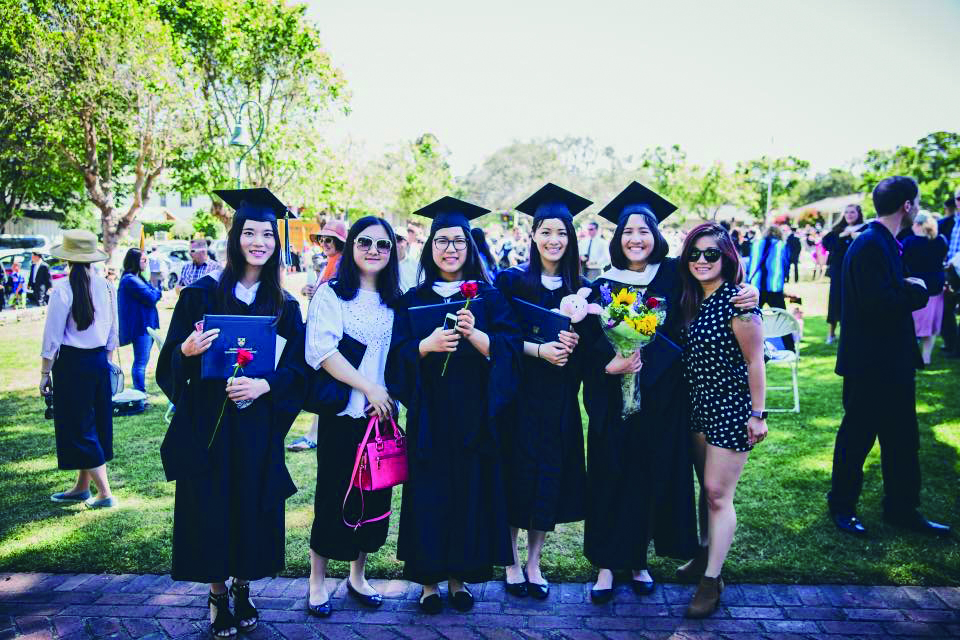 In its pursuit of subject development, SFL has formulated the guideline of “Quality foreign language teaching for talent development, responsiveness to the priorities of government with leading language and culture research”, and has established strong links to government and industry including China International Publishing Group, Shanghai Municipal Language Affairs Committee, Shanghai Academy of Educational Sciences, Shanghai Mental Health Center, Huawei, Commercial Aircraft Corporation of China and iFLYTEK. Building on its strengths in corpus translation, language testing and clinical linguistics, SFL has developed language products through university-industry cooperation, delivering great social benefits. The SFL translation team has completed the Chinese-English translation of the materials of Tsien Hsue-Shen Library and the English-Chinese translation of the literature of the International Military Tribunal for the Far East, contributing to the promotion of Tsien Hsue-Shen’s deeds and the research on the International Military Tribunal for the Far East. SFL has also carried out research on the global image of China and multiculturalism. SFL subject development serves the national strategy of “Going Out”, and the research has received the recognition of the state leaders and the academic community.

With the SJTU spirit of “truth-seeking, striving, pioneering and improving” and the school motto of “Being well-versed in the learning of both ancient and modern times, and of both the East and the West”, SFL will focus on talent training, implement internationalization strategies, be responsive to the national strategies, conduct research concerning major theoretical and practical issues, and vigorously promote the interdisciplinary development of foreign language subjects to cultivate talents with professional competence and global vision, and to build top-ranking interdisciplinary subjects of foreign languages!

In the early 1980s, professor Liu Zuwei, a well-known translation specialist, became head of the department. In 1980, the science journal EST Learning was founded in SJTU, and it was then widely spread throughout China. At the same time, the EST Center was established. In 1986, the Department of Foreign Languages for Science and Technology was authorized to award master’s degrees in foreign languages and applied linguistics and in 1993 to offer doctoral programs in foreign languages and applied linguistics, the earliest among its fellow colleges and universities. In 1988, the Laboratory for Computational Linguistics was built, which later became the Institute of Language Engineering in 1990. In 1995, to support the development of national sports, sports-education joint classes for star athletes were set up.

In 1997, the School of Foreign Languages was formally established. In 2000, it was able to award master’s degree in English language and literature. In 2003, the postdoctoral research center was set up. In 2007, as a pilot unit in China, SFL was authorized to award master’s degrees in Translation and Interpretation. In 2010, SFL was authorized to offer a first-level doctoral program in Foreign Languages and Literatures. 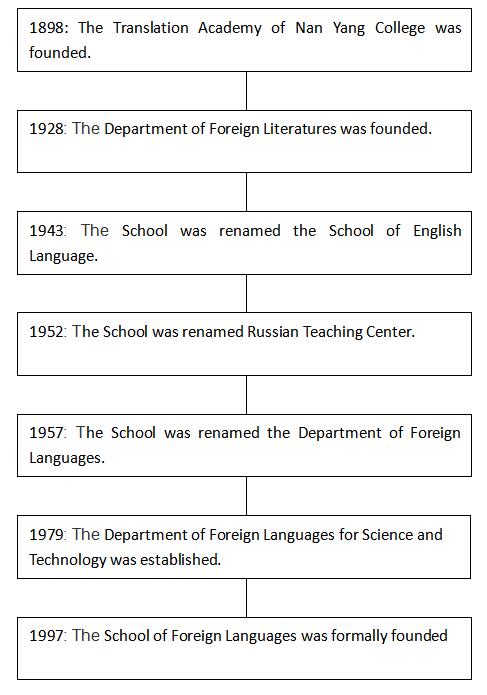 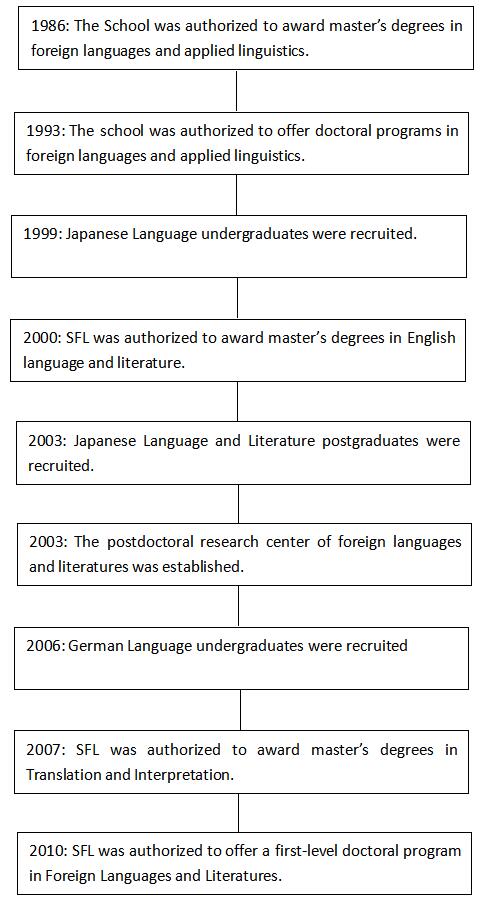